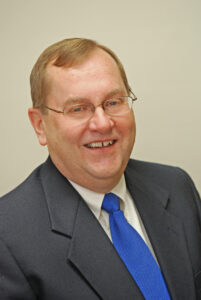 Steve Smith is Senior Director of Agriculture for Red Gold, the world’s largest privately held tomato canner. In his capacity he directs all the agricultural activities from variety development through harvesting. In addition to his production responsibilities, he is involved in the company’s agricultural public policy endeavors, such as participation in Farm Bill development, Indiana Agricultural Advisory Board, current Chairman of FieldWatch, Inc. and Chairman of Save Our Crops Coalition. He is also active in other industry endeavors such as the American Fruit and Vegetable Processors Coalition, Mid America Food Processors, the Sysco Corporation National Sustainability Advisory Board, the USDA Fruit and Vegetable Industry Advisory Committee and past member of the Dean’s Advisory Council at Purdue University. Steve earned his Bachelor’s Degree in Agriculture, with Distinction, from Purdue University where he was honored with the Distinguished Agriculture Alumni Award in 2009. He was named the H.D. Brown Person of the Year in 2015 by the Mid America Food Processors Association. Steve is married and the father of three children and nine grandchildren, a private pilot, enjoys travel, likes operating his small farm and is active in his local church.