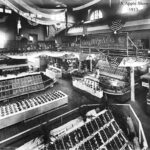 For several years prior to 1976, the Hort Society met at the Ramada Inn on Shadeland Avenue.  These were all January or February meetings. In 1975, the Vegetable Growers met with the Farm Market Conference at the Holiday Inn North in Lafayette in February.  I do not know what they did prior to 1975. 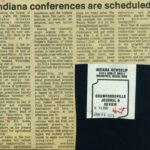 In late 1975, the three organizations negotiated a meeting merger and agreed to meet together in February 1976.  The principal Purdue staff involved in the negotiations were Rensom Blakeley for the Farm Marketers, Roman Romanowski for the Vegetable Growers, and Dick Hayden and Frank Emerson for the Fruit Growers.  The location chosen was the Airport Hilton Inn in Indianapolis.  At that meeting, there were 31 exhibitors.  The meetings continued at The Airport Hilton through the 1983 meetings.

In 1982, the Indiana Flower Growers Association met once with us but maintained a separate registration. This was their organizational meeting, so the Congress acted as an incubator. They decided that the time of our meetings was not compatible with their needs so opted to meet by themselves in the summer.

The meetings were successful and grew in both attendance and in the number of exhibitors.  About that time the Adam’s Mark Hotel was built and it’s convention facilities fit our needs better, so the meetings were moved there in January 1984.  At that time, there were only three organizations involved.

In February 1986, the Raw Products Conference joined the group under the leadership of Ed Tigchelaar, and the Indiana Greenhouse Vegetable Growers group joined with Jerry Wilcox as the leader.  In 1987, the name “The Indiana Horticultural Congress” was coined and continued until 2019.  In recent years the phrase “and Trade Show” has been added.  The name was changed to “The Indiana Horticultural Conference and Expo” in May 2019.

The line-up of organizations remained essentially the same through 1994. Sometime in the early 90’s, because of declining numbers of growers, the Greenhouse Growers merged their program into the Indiana Vegetable Growers Association and ceased to exist as a separate entity. 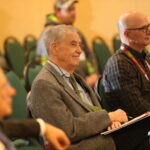 In 1996, the Center for New Crops and Plant Products held sessions at the Congress, and this continued until 2000. Jim Simon and Jules Janick led this group. 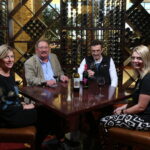 In 2002, the Indiana Farm Market Association was reorganized and revitalized under the leadership of Tom Roney, Ruth-Ann Roney, and others.

Obviously, the Congress has grown in both organization numbers and in total attendance.  The trade show has also grown over the years.   The Congress has enables each organization to have a much better annual meeting program than they might have been able to if they met alone.  There would be no possibility of attracting the exhibitors to as many trade shows as there are organizations.

Throughout the years, the Purdue Cooperative Extension Service and the Department of Horticulture and Landscape Architecture have been supportive of the Horticultural producer organizations involved in the Hort Congress. 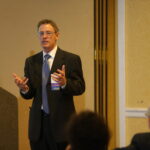 In the early years’ Ransom Blakeley, Roman Romanowski, and Dick Hayden ran the conference as a committee, with Dick Hayden as treasurer.  After Roman’s death and Ransom’s leaving, Dick became the chair of the conference and remained in that capacity until about 1992 when Jim Simon became the chair of the Congress.  When Jim left Purdue in 2000, Mario Morales became chair (2000-2003). Peter Hirst was chair 2003-2019 and all major decisions were made by the executive committee (Bordelon, Maynard, Hirst) and planning committee comprising representatives of the major industry groups (fruits, vegetables, wine grapes, raw products, organics, farm marketing) . During this period, total attendance doubled from around 400 to 800 attendees per year. Dick Hayden was treasurer of the conference until the mid-1990s and since that time Liz Maynard assumed this role. In 2017, the Hort Congress was moved from the Wyndham Hotel (formerly called Adam’s Mark Hotel) near the Indianapolis Airport, to the Marriott East Hotel on the other side of Indianapolis.

Petrus Langenhoven and Kyle Daniel were appointed as the new co-chairs in May 2019. They made several very exciting changes to the conference.  The name of the event changed to the Indiana Horticultural Conference and Expo. To serve our audience better, several additional tracks were added to the already great lineup of previous years. A targeted selection of educational tracks, a diverse set of expo vendors, and ample opportunities for networking set the stage for a great conference in 2020. Due to the COVID-19 pandemic, the 2021 conference was canceled. Instead, we presented a Vegetable Farming and Fruit Management Webinar Series.